Big Match at a Small School

My daughter’s college search came down to a final four of 2 very large state universities and 2 small liberal arts colleges.  Since before she started elementary school she had talked about going to a big school, and her top 2 seemed to be obvious winners:  our state’s flagship university (of which I am a proud alum) and an even larger public school in a neighboring state (where she had played volleyball tournaments over 6 Memorial Day weekends). 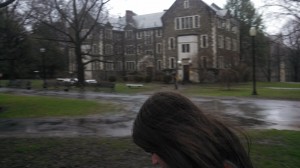 Over spring break my daughter and I visited that final school for the first time.  Walking around in some of the heaviest rain I have ever seen, she was clearly on the campus she wanted to call home.  Halfway through our visit she asked, “Can we stop by the bookstore before it closes?”  I slowly replied, “Does that mean…?” and she confirmed:  “This is the one.”  At the bookstore she bought a sweatshirt and a lanyard, and then we finished exploring campus.

So WHY did she pick the smallest school on her list?  Here are a few advantages my daughter sees:

So how do her mother and I feel about our daughter’s choice?  Surprised.  But also peacefully happy for her.  It is clear that she found her match….in a place where she almost never looked.