Coaching Kids vs. Coaching to Win

Two years ago, my then-7 year old son began his first football season more excited than he had ever been about playing a new sport.  Even while he was loving soccer the previous two falls, he had been lobbying to give football a try.  So we signed him up for flag football, assured at the spring registration day by a member of the football club’s board that he was eligible, but were called the following week with news that he was actually 1 year too old and needed to play 7-8 year old tackle.  While I was sure I did not want him in football for the long term because of injury risks, our boy was easily one of the biggest kids in the age group, so my wife and I were OK with giving it a try.  He was more than OK with it:  the boy was eager. 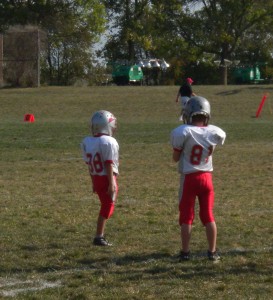 The Big Guy (right), with a teammate

Practices started, and while I thought the adults involved (both parents and coaches) were crazy to expect 7-8 year olds to practice 5-6 days per week for almost all of August (until school started), he was having fun; so I parked in my chair on the sidelines and enjoyed watching him practice.  As it turned out, the coach played my son roughly the minimum number of plays permitted by the league all season.  In most games the coach actually kept count of the plays and pulled my son off the field for good as soon as he reached that minimum, even in the middle of an offensive of defensive series.

Lack of effort?  No–The boy worked hard whenever he had the opportunity to get into a game, and he never shied away from contact.  Lack of performance?  No, again.  I saw my 7 year old offensive/defensive lineman pushed backwards exactly once during the entire season.  In every other play my son ether locked up his opponent in a tie, pushed him backwards, or got past him.  I am not claiming he was a 7 year old Russ Grimm or Reggie White, but he did at least well enough to fit in with what his peers were doing around him.

But let’s set all of that aside for a minute and assume that my son–or any player–had been the most inept 2nd grade football player since the days of Red Grange.  This was the LOWEST team available in a league without cuts, essentially a recreation team.  Where was he supposed to gain experience?  How did sitting on the bench at age 7 foster interest in the game?

So what WAS the rationale?  Taking the coach up on his public offer to address any concerns along the way to guarantee a great experience for every boy, I emailed to schedule a brief meeting for after practice about what my son needed to improve in order to get on the field.  The coach–a former college player and the football club board member who initially advised us to register for flag–explicitly told me that the team “needed” to make the playoffs, and he felt my son should not be in the tackle league without first playing a year of flag football–even though the league’s policy was inflexible about the age limit for flag.  However, he also assured me that all of the boys would have more balanced playing time after they got past the first 3 opponents, who were supposedly the main obstacles to the playoff grail; he shared that he did not want anyone to have the experience his family had gone through the previous year when his wife “rode” his older son’s coach all year about playing time.  I walked away after a very friendly conversation still disagreeing with the ‘win first’ mentality, but confident that the situation was going to improve for my son.

The balanced playing time assurance was–to be kind–inaccurate.  All of the other players had significantly more playing time that season, except for one:  surprisingly, the other bench-dweller was the coach’s own son.  Apparently the part about being committed to winning was sincere.

By mid-September, my son was already starting to talk about returning to soccer the following fall because “they let me play.”  After the team’s eventual loss in the playoffs, I took my son out to breakfast on the way home, and while we were eating he told me–unfortunately with blank resignation because the bitterness had worn off–“I only played in the first half because we were trying to win.”  I followed up with the league (and since then with many members of our community who have asked me about my experience with the football club) in extensive detail about my concerns and my son moved on.  Our now-9 year old is once again happy and excelling on the field…in soccer.

7 year old kids.  A coach’s “need” to make the playoffs.  The two ideas do not seem to belong together.