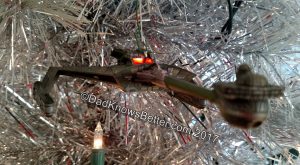 I have enjoyed Star Trek since I started watching re-runs of the original series when I was in elementary school in the early 1970s.  So when my mother-in-law saw the original U.S.S. Enterprise Hallmark ornament orbiting a tree in a hair salon in 1991, about after a year after my wife and I were married, she started scanning; but that ornament was already sold out everywhere.  I still do not have it–and at a current asking price of approximately $200 online, I’m OK with that.  (Fan does not have to equal fanatic.)

Docked for the holidays.

But my M.I.L. immediately realized she had stumbled upon a potential annual present for my November birthday and Christmas, starting in 1992.  Over the past 25 years, she has beamed quite a few ornaments my way, including ships, characters, and scenes, drawn from the original series (TOS), Next Generation, Deep Space Nine, Voyager, Enterprise, and 3 groups of movies…all of the possible corners of the franchise.

Now, while my wife is not so fond of my Star Trek collection, I managed to establish a Prime Directive:  Ban my ornaments and risk The Wrath of Your Mother.  (Cue Mrs. DKB:  “Maaaaaaaaahhhhm!”)  Then we entered a final frontier a few years ago when my M.I.L. gave me a silver tree which has become a galaxy completely separate from our actual Christmas tree–which seems appropriate, as the Star Trek collection is really 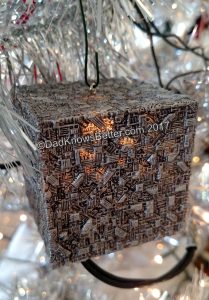 just a fun complement to the spiritual and family focus that has always been the true center of the holiday in our house.

After 25 years, the collection is here to stay.  I enjoy it.  The kids enjoy it.  And my wife even surprised me this year by setting up the silver tree and deploying the ornaments while I was out of town picking up our oldest daughter from college. 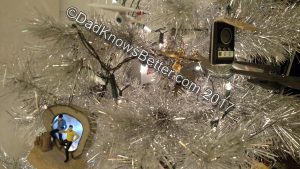 Note:  I did not receive any compensation or consideration related to any part of this post.  In fact, the idea that the people at Hallmark or Paramount have ever heard of DKB is not…..logical. 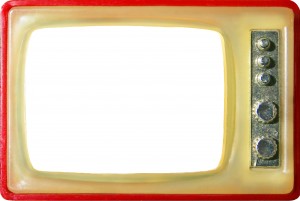 Thumbs Up Or Down? Sifting Film Ratings

Rude language and sex are the touchy issues that give a movie ‘thumbs down’ quickly in my house…at least until the kids are in bed.  If cursing or nudity are the main reasons for a PG-13 rating, that movie is off the list for my elementary and middle school kids.  For example, Austin Powers?  Not for the kids, Baby.  The same goes for Rated R:  As a former-English-teacher-dad of a book-loving high school student, I would like to share Shakespeare In Love with my daughter…but for all its strengths, the movie crosses a few too many lines along the way–for now.

In fact, from my point of view, the entertainment industry lets down families when they salt movies and programs with coarse material that adds little but makes responsible parents think twice about their kids watching.  For example, the Transformers films feature the Witwicky parents making repeated sexual remarks that do nothing to help the Autobots take down the Decepticons.  On the TV front, my son heard the Rock was going to return to wrestling a few weeks ago; he knew the Rock from several family films.  But along the way we discovered that wrestling on TV now includes obscene   between-match dialogue that would have drawn a lecture from the Hulkster in the ’80s when he encouraged the Hulkamaniacs to be good and take their vitamins.  So we will have to pass.

But what about violence?  There has been a lot of talk in the media about film violence desensitizing kids, maybe even leading them to be more violent themselves.  But for me, there is a vast difference between realistic violence and what I consider ‘cartoon’ violence.  To be clear:  I don’t want my kids on brain detail with Jules in Pulp Fiction.  And the first rule of Fight Club?  Don’t let my kids watch Fight Club.

On the other hand, by ‘cartoon’ violence, I don’t necessarily mean ‘animated’….although Wile E. Coyote and an A.C.M.E. catapult would also fit. I’m talking about violence that moves the story along but that even my elementary age son can understand as pretend fun.  Blowing up an enemy starship?  Fine.  Release the Kracken!?  Bring it.  Pirates that turn into skeletons at night?  En garde.

So this spring we will be heading out to see the new Avengers film, with confidence that it’s a healthy, good time–the modern equivalent to Ultraman and Star Wars from my own childhood.

Note:  Dad Knows Better has enjoyed all of the films/shows/etc. mentioned above, but the point here is about when they would be age-appropriate, and Dad happens to be an adult.  Also, Dad has not received any compensation related to mentioning any of the titles in this (or any other) post…unfortunately.